This feature is limited to Gaming Tools Pro subscribers

WinEQ 2 provides single-window Picture-in-Picture. Imagine trying to play two characters at the same time, with only one monitor. You can either play in two small windows, or only have one character in view at a time, leaving one potentially vulnerable. With WinEQ, the last game window to be in focus can automatically place itself in a smaller window on top of your current one. This means that for the cost of a small portion of your main window's visibility, you gain a great amount of visibility for your other character, albeit small. The size and placement of the picture window is also configurable.

Enables or disables the display of a Picture-In-Picture feature 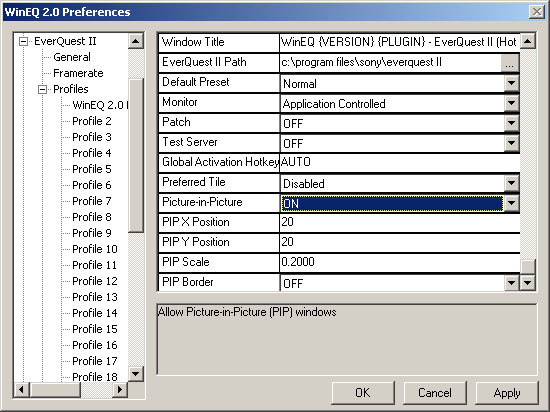 The X position where a PIP will appear in this profile. The X position starts at the left side of your screen and is measured in pixels.

The Y position where a PIP will appear in this profile. The Y position starts at the top of your screen and is measured in pixels.

The size of the PIP window that will appear in this Profile. The Scale setting must be a value between 0 and 1. Using a setting of 0.5 will make the PiP window half the size of your current screen resolution.

If set to on, the PiP Window will have a border